How Are Natural Gold Nuggets Priced?

Natural Gold nuggets come in many sizes, shapes, and grades. Each of these factors will affect how the gold nugget is priced. 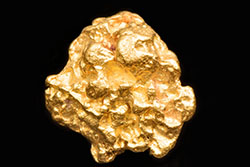 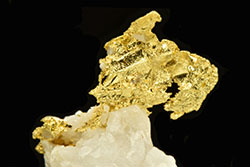 Gold in quartz specimens, are comprised of natural quartz rock that has visible crystalline gold protruding from or in the quartz rock. Occasionally gold is found in some host rock other than quartz but this is extremely rare. In that case it might be referred to as “Gold in matrix”. Since most natural gold found in its host rock is not visible to the naked eye and must be crushed and processed to release the tiny amounts of gold, finding gold quartz that is rich enough to become a collectible gold specimen is a very rare occurrence and makes these specimens very valuable. Gold in quartz (or matrix) specimens are not priced mainly for their gold content, but rather according to their rarity, beauty, location, and desirability. 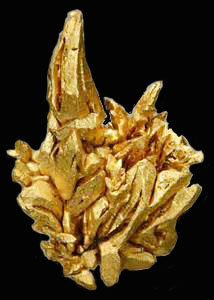 To define some of the terms used above, Dendritic crystals are gold crystals formed into a branching leaf or tree-like pattern. Wire crystals are gold crystals that are formed into thin wires. A hoppered crystal is a form of crystal, defined by its "hoppered" shape. The edges of hoppered crystals are fully developed, but the interior spaces hollow. The result is what appears to be a hollowed out step lattice formation, as if the interior sections of the individual crystals ahd been removed. In fact, this "removed" sections never filled in, simply because the crystal was growing so rapidly that there was not enough time (or material) to fill in the gaps. The interior edges of a hoppered crystal still show the crystal form shape and characteristic and so appear to be a series of smaller and smaller stepped down miniature versions of the original crystal. Trigons are simply a triangle shaped gold crystal. An octahedral gold crystal is a three-dimensional, eight-sided gold crystal in which all the faces are equilateral triangles (i.e. it resembles a double pyramid) and is very rare to see. .