Once you have held a substantial sized natural gold nugget in your hand, you are highly susceptible to catching "gold fever" and most likely will. A symptom of gold fever is the desire to go out and find your own nuggets. This article will give you a few tips to help you to do so. However, you should look at "gold nugget hunting" as a hobby, as it is most likely that you will spend more money hunting gold nuggets than the gold nuggets you actually find will be worth. Unfortunately, most of the known gold fields have been carefully scoured over for decades by other nugget seekers. If you are lucky enough to find a new gold field or a buried gold nugget, you will be one of the lucky few.

I have personally spent many hours and days with a metal detector hunting for gold nuggets. It can often be tedious and back breaking work. There is an awful lot of buried trash and old spent bullet casings left behind by miners of old, hunters, and target shooters that most of your time is spent digging up nothing of value. Still, when you do finally find gold, and pull a shiny nugget from the earth, it is a thrill indeed. 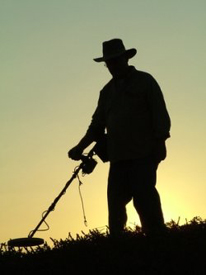 The best areas for finding gold nuggets are areas that are already known for producing nuggets. You can research such areas by checking for books on gold nugget hunting on the internet or at your local library. Many books have been written which disclose the locations of known gold areas. Remember though that if the area is well known, it has likely been scoured by other gold nugget seekers and may even be "claimed" land, meaning you will be trespassing if you go detecting there. They say most gold is found in the library, meaning it takes lots of research, so be sure and do your homework before prospecting...it'll save you lots of time and frustration.

Another good resource is to exchange ideas with other gold prospectors by joining a gold prospecting club like the GPAA, which allows you access to many known gold bearing areas throughout the US and to learn from those who have experience in prospecting. I have found most of these clubs to be a wealth of information for the new prospector.

Other methods for finding gold nuggets beyond nugget shooting with a metal detector are dredging, panning, sluicing, and hard rock mining. With hard rock mining the gold will be in crystalline form, and will often be attached to the host rock in the form known as "gold in quartz".

You can see videos on finding gold nuggets on our website, which has videos of nugget shooting, panning, dredging, sluicing, and hard rock mining.